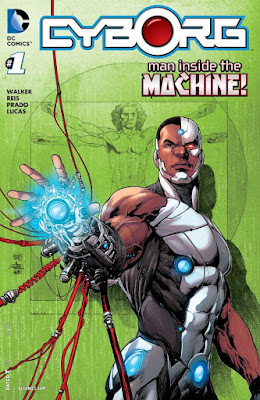 Email ThisBlogThis!Share to TwitterShare to FacebookShare to Pinterest
Labels: Cyborg

Over a year since I've posted here?! And Cyborg STILL doesn't have a series!??! I'm not sure which is more preposterous. At any rate, I'm playing nice with the Justice League of Bloggers and thought I'd represent Cyborg over here. We're doing a lovely little crossover today to celebrate some art from Steve Garcia. 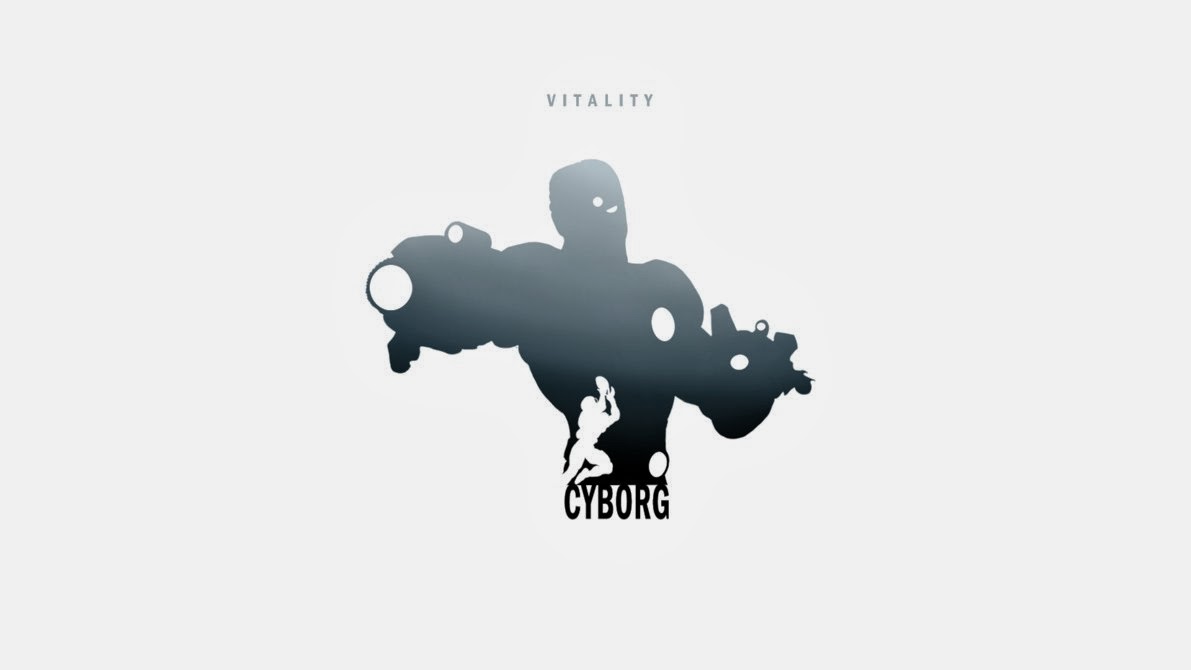 With each silhouette, Garcia drops in a relevant gradient and a buzzword. In this case, Vic is hit with "Vitality." That's an interesting choice as it means the power or ability to continue in existence, live, or grow."
The outer silhouette is clearly from the New 52 bust for Vic Stone, but the inner shadow of him catching a football I'm guessing is from the first issue of Justice League.

Here's some links to his stuff on the this here internet:

And another pair of links for my own blogs:
Red Tornado
Doom Patrol


Check them all out. Come back and let me know what you think. Or maybe sound off on the new blogs after clicking through. Enjoy!
Posted by Doug at 5:26 AM No comments:

A few months back, well actually over a year now, DC relaunched the DC comic book universe following the events of Flashpoint. Flashpoint itself was significant in that it took the DC Universe and shoved it through the transformational filter of an Elseworlds story while removing any hope  for an undo or reset button. Quite simply Geoff Johns and Andy Kubert were crafting a new normal for DC Comics. Part of that new normal included placing a sharp focus on Cyborg, who is now, reasonably, from the Motor City: Detroit, Michigan.

That combined with the demise of one of my favorite titles at the time (Doom Patrol by Keith Giffen and Matthew Clark with assists from various folks) inspired me to consider crafting another blog for another favorite character. At the time, there was no blog devoted to Vic Stone. "I'll start a Cyborg blog!" Yeah, I started it. It sat there and did absolutely nothing.

At the time I worked in the heart of downtown Detroit. As you've seen, heard, read or dreamed, the city is struggling to survive and find itself. It's not doing so without a fight though. Fueled by the blue collar mentality that made the automobile an American institution, Detroit is bouncing back with pockets of greatness and innovation that is inspiring to see. Since then, I've returned to the suburbs, thanks to a new job closer to home. I still love Detroit, but I digress.

This blog is not about Detroit. You can check out any number of blogs for that, including Detroit Unspun and Positive Detroit.

This is also not a blog exclusively about Cyborg. I love Cyborg and the character deserves some love. My focus on Vic Stone here will be directed towards the New DCU version of the now iconic DC character.

Despite my unabashed love for the Gerry Conway and Chuck Patton Detroit-based Justice League of America, this blog is not about the original Justice League Detroit (or Motor City League as James Robinson termed it during Blackest Night). You can go here for a blog completely dedicated to that. The proprietor of that blog, Frank, will almost certainly have some highlights of his own in days to come.

So what is this going to be about?

This is a blog about the New 52 metro-Detroit based heroes. I'll be dialing the focus in on Cyborg and Vibe mostly (Vibe since he has his own series, Cyborg since he deserves it) but will occasionally extend the coverage to include other heroes from Michigan in the New 52 DC Universe, like:


I've got a few other blogs going on, I review comics for CBR, and I have 3 kids that manage to fill a great deal (greatly) of my free time. What that means is this is, most likely, the most inconsistent blog you'll ever read. No, I'm not trying to scare you away, nor am I making excuses, I'm just saying the posts may have lulls in between, but I'll try to make it worth your time when they do happen.

In the meantime, if you're looking for things to do in the D (that's what we lovingly call our fair city), be sure to check the Unspun blog linked above or try Cobo for some higher profile events, like details on the North American International Auto Show. It's almost springtime in southeast Michigan, which means Tiger fever is starting to spread just a little. Until then, we're on the eve of DC Comics releasing Justice League of America and Justice League of America's Vibe. For more on those, tune back in soon.
Posted by Doug at 4:24 PM No comments:

I've been looking forward to seeing more action and excitement in the comic version of the Motor City since Vic Stone's first appearance in Geoff Johns' Justice League. Then we got Baz from Dearborn (which borders Detroit) and now we've got Vibe joining in.


The crux of the interview, however, is this:


Detroit, which is where Darkseid's invasion started in Geoff and Jim's Justice League book, is now unstable. Pockets of the membrane of reality have been so badly damaged there that things are constantly falling through from other dimensions. And Vibe is there to help clean up the mess. Even he says that is kind of ironic being Hispanic that he has become a dimensional border patrolman. 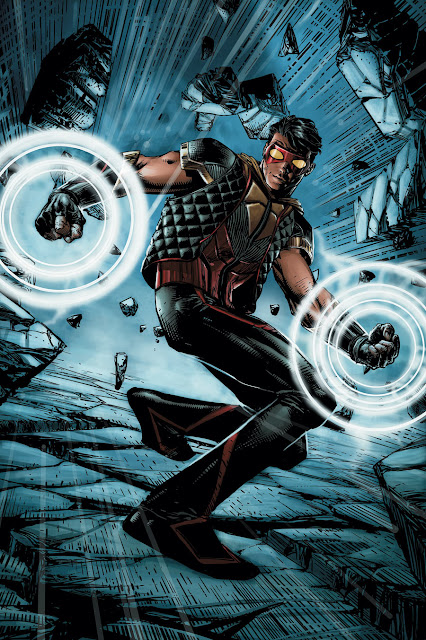 It is fall in southeast Michigan and that means football and, as was the case this year, playoff baseball. It also means falling leaves and falling temperatures, frost on the windshield and pumpkins on the porch for decoration between Halloween and Thanksgiving. Sometimes fall even brings along some surprises.

In the case of comics, specifically comics with Detroit roots, fall of 2012 brings quite the surprise in the form of an announcement about a comic book series set to launch in February of 2013. MTV Geek was given the right to exclusively announce the upcoming series featuring a "fan-favorite character" that would be spinning out of the upcoming Geoff Johns-penned Justice League of America.

"Hot-diggity!" I thought. "Cyborg is FINALLY going to get his own series in this New 52 relaunch!" After all, there were 52 titles that launched. The first wave had six titles wash out (Hawk & Dove, O.M.A.C., Mr. Terrific, Static Shock, Blackhawks, and Men of War) to be replaced with six titles that didn't include a Cyborg solo series. Then a second round of cancellations was announced (Captain Atom, Voodoo, Resurrection Man, and Justice League International) only to have those replaced with four titles that, again, did not include a Cyborg solo series. So when it was recently announced that DC was shutting down Frankenstein, Agent of S.H.A.D.E., Blue Beetle, Grifter, and Legion Lost, I got my hopes up again. After all, this would bring the total load of New 52 titles to 66 titles. Surely out of sixty-six titles ONE of those had to feature the solo adventures of Vic Stone, right?

The fan favorite characters getting their own titles are Katana and, as it will be billed on the cover: "Justice League of America's Vibe." Huh?

Don't get me wrong. I LOVE the Motor City League. I grew up in Toledo and fondly remember spending my meager allowance on Justice League comics fromt he local convenience store (seriously, they carried comics) and was completely unaware just how poorly characterized Vibe was. It didn't matter to me, I saw him as a guy who was pretending to be something he wasn't. Kind of like Nightcrawler from the X-Men. But not really. After all, Nightcrawler didn't breakdance, although he did have a ridiculously stereotypical accent.

So Vibe. Wait, I'm sorry, "Justice League of America's Vibe." Hmmm. I'm willing to give it a go. I'm not overly keen on the fact that I still don't have a Cyborg series, but at least Vibe will be set in the Motor City. I just hope they get it right. The first cover has a superimposed image of Darkseid and depicts Vibe fighting Parademons so it can't be all bad, right?

I think with this announcement it just might be time to change up the content and mission of this blog. I'll try to have an update soon.
Posted by Doug at 4:02 PM No comments:

Doug
A father of three, husband of one, and a fan of all things good.